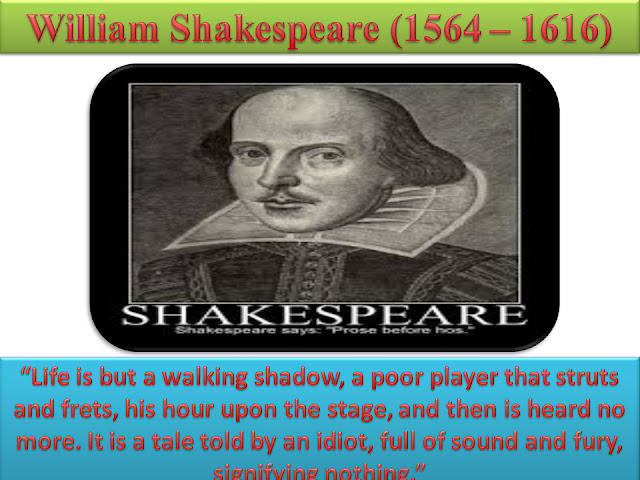 Shakespeare was born in 1564 on the 23rd of April. He remains an enigma as very little evidence remains of his life, except the extraordinary poems and Plays he wrote. All that we can do is to take the bare facts of his life and reconstruct his life in all its passion and glory.

Shakespeare lived his childhood in Stratford, a small town near London. He must have been a keen observer of people because the kind of observations that he brought into his plays in later life are so universal and cannot come without deep seeds laid in childhood.

In 1582, at 21 he married Anna Hathaway. 3 years later he had his first child Susanna of whom he was very fond.

In the early 1590s he struggled to make his mark in theatre in London and by 1598, he succeeded in establishing himself as a producer, playwright, and actor.

From here he flowered and all his native genius poured out in three major phases, first of the histories and comedies, then the deep tragedies and finally the tragi-comedies.

Shakespeare excelled himself as a supreme entertainer of his times, but little would that world would have known that he would be played by every single community and culture across the whole world in the future.

Today he is widely recognized as the supreme literary giant who could create stories from the most ordinary person by giving a universality, depth and shocking familiarity that could entice any audience anywhere, anytime.

This ability came from his deep observation of people and the world around him and even in history. He understood the core, flawed nature of human beings and could see with stark clarity where it would take them. He could see drama and comedy and tragedy from all the real people he observed.

The comedy was the flawed and foolishness of people and the tragedy too was the same. Shakespeare had a simultaneous ability to craft DRAMAS from that material that required a special genius.

Thus you see Shakespearean characters, and they are not out of this world, they are all the people whom you know and recognize, the common fears, insecurities, jealousies, attachments, loves, betrayals, the tragic-comic flaws…

Shakespeare is the common man’s world but taken to a universal stage.
Posted by Dr A.C.V. RAMAKUMAR
Email ThisBlogThis!Share to TwitterShare to FacebookShare to Pinterest
Newer Post Older Post Home