THE LIFE AND GENIUS OF OSCAR WILDE

THE LIFE AND GENIUS OF OSCAR WILDE 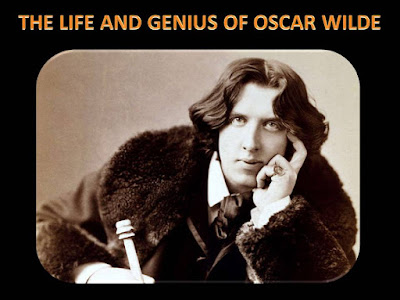 Oscar Wilde was that rare genius, who was highly educated in the classics, and developed a keen sense of the beauty of literature as against propaganda as such. He also made clear both in his writings, and even in his life, that a writer and a person must not follow conventional morality but develop his own sense of truth and morality. He was very modern, daring, open, and expressive and mission oriented not only about his works, but about literature as such. He had a unique view of what IS really beauty.
Early Life and Education

Oscar Fingal O'Flahertie Wills Wilde was born on October 16, 1854, in Dublin, Ireland. His father, William Wilde, was an expert doctor and was also knighted for his contributions to medicine.

Wilde was a very sensitive and intelligent child and was in love with books from early on. He studied in the Portora Royal School at Enniskillen.

He absorbed himself in Greek and Roman studies and fell deep in love with them. He won a series of prizes in school. He truly was a master in his studies. And what is more, he had a passion for great literature and understood the deeper significance of Literature like no other.

He achieved this kind of learning very early and with absorbent mind, and obviously this unfolded as wings later in life, and also led to conflicts with a world that could not see his vision exactly.

He graduated in 1871. Then Wilde got the Royal School Scholarship to attend Trinity College in Dublin. At the end of his first year at Trinity, in 1872, he stood first in the school's classics examination and got the college's Foundation Scholarship which was the highest honor given to under graduate students.

Upon his graduation in 1874, Wilde joined Magdalen College in Oxford with a scholarship. At Oxford, Wilde continued to absorb himself in academics and won several prizes. He graduated in 1878.
Beginning years of his career and life

After graduating, Wilde went to London and lived with a friend Frank Miles who was a portraitist. There, he concentrated on writing poetry and published his first work, called, Poems, in 1881. That book made him known among many writers.

Then Wilde embarked upon a legendary lecture series, and he gave a staggering 140 lectures in only 9 months in the USA.

He met many great writers of his time, and had a great love for Walt Whitman whom he befriended.

After his American tour, Wilde returned home and continued lecturing in England and Ireland till 1884.

On May 29, 1884, Wilde married a wealthy Englishwoman named Constance Lloyd. They had two sons: Cyril, born in 1885, and Vyvyan, born in 1886. He also edited Lady's World and took it on an intellectual level.

His famous quote about that magazine was – “The Lady's World should be made the recognized organ for the expression of women's opinions on all subjects of literature, art and modern life, and yet it should be a magazine that men could read with pleasure."

By 1888 Wilde felt a deep inner need and also was ready to what would become his masterpieces. He wrote the following works.

The Happy Prince and Other Tales, a collection of children's stories (1988)

Intentions (1891) an essay collection in which he laid out his original theory of Art as beauty and not to propagate anything and in which all elements, the of the inner psyche had to be given freedom of expression.

The Picture of Dorian Gray.

This novel is a strange, very haunting story of a beautiful young man, Dorian Gray, who wishes for a portrait that reflects his inner world, and what happens to his life lives with pleasure and sin.

Then Wilde took to writing plays and he did a brilliant job of showing both the dark and the bright sides of human being but with laughter and satire and with great delightful entertainment.

The Importance of Being Earnest (1895), his most famous play.
Personal Life

Around the same time that he was enjoying his greatest literary success, Wilde fell in love with a young man named Lord Alfred Douglas. On February 18, 1895, Douglas's father, the Marquis of Queens berry, who came to know about the homosexual relationship and insulted Wilde.

Wilde sued him and it backfired. The trial that followed brought him a bad reputation and he was also imprisoned on May 25, 1895 for 2 years.

Wilde, after being release, spent time in isolation and wrote on his prison experiences and, in 1898, published it as, "The Ballad of Reading Gail."
On November 30th, 1900, Wilde contacted meningitis and died.
A strange life came to an end. It was a life full of academic reading, falling in love with the beauty of literature, developing deep relationships, including even a homosexual one, trying all forms, poems, novels, plays, and having a great number of lecture series to the world.

It was a life full of love, passion, and in one word- life